Yellen Really Doesn’t Want to Take Away the Punch Bowl

The Federal Reserve, as widely expected, indicated Wednesday that it might raise interest rates as soon as June. The looming prospect of tighter monetary policy could, in theory, have been expected to rattle markets, as it did in mid-2013 when investors had a “taper tantrum” once confronted with the impending winding down of the Fed’s “quantitative easing” bond-buying stimulus.

This time, though, stocks surged when the Fed released its statement at 2 p.m. and kept climbing as Janet Yellen explained the Fed’s outlook during her afternoon press conference. The S&P 500 finished the day up 25 points, or 1.2 percent. Treasuries rallied as well, driving the yield on the benchmark 10-year note from 2.036 percent to below 2 percent. 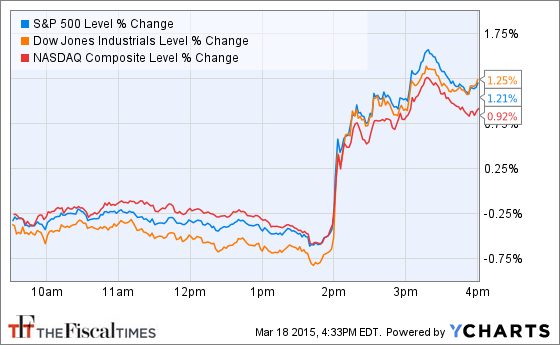 The answer lies in the details of the Fed’s cautious statement and updated outlook. While the rate-setting Federal Open Market Committee dropped its promise to remain “patient” as it considers when to start raising interest rates for the first time in years, Yellen told reporters that change “does not mean we are going to be impatient” in deciding when to take action.

Related: Will Fed Rate Hikes Cost You in Higher Taxes?​​

“The FOMC remains clearly focused on hedging downside risk,” Diane Swonk of Mesirow Financial wrote in a blog post, adding that “members would rather wait and raise rates too slowly than risk stamping out growth and having to reverse course and lower rates soon after the first increase. They also want to make sure the recovery is truly self-sustaining before removing the proverbial punch bowl.”

The FOMC’s policy statement was revised to say that the committee would raise rates “when it has seen further improvement in the labor market and is reasonably confident that inflation will move back to its 2 percent objective over the medium term.” And Yellen emphasized, as usual, that the timing of a decision to raise rates would depend on economic data.

In another important way, from a market perspective, the Fed actually signaled that it would be even more patient than before: The Fed’s board members and bank presidents lowered their overall forecasts for how high rates would be by the end of the year and over the next three years — suggesting that even if central bankers do raise rates in June, or perhaps more likely in September, the process of normalizing interest rates will be more gradual than they had signaled before.

Related: Why the ‘Smart Money’ Is Bailing Out of the Bull Market​

“Officials are still suggesting more tightening than markets are pricing in, but the differential has dropped, along with the estimate of the longer-run normal unemployment rate -- those changes were more dovish than expected,” said Jim O’Sullivan, chief U.S. economist at High Frequency Economics.

Those projections reflect the Fed’s newly downgraded forecasts for economic growth this year and trimmed its inflation expectations while also lowering its estimate of how far the unemployment rate can fall without creating additional inflation pressure.

Related: America Is In Deflation. So What?​

“This is a defensive Fed,” Ian Shepherdson of Pantheon Macroeconomics wrote to clients. “They've made the minimum change expected, but then backpedalled furiously, as if to say, 'We've done it, but we didn't really mean it, and we're now very keen to avoid giving the impression that we might take the next step soon.'"

That, apparently, was more than enough to prevent any sort of “tightening tantrum” for now.