Suddenly, the two most important factors for stocks — the economy and earnings growth — are both bouncing back. At least, on the surface they are.

Last week, the government reported that third-quarter GDP growth clocked in at 2.9 percent, the best performance in two years. And as the earnings-reporting season rolls on, the S&P 500 earnings growth rate has climbed into positive territory and is on track for a 1.6 percent jump according to FactSet — which would be the first increase in profitability since the beginning of 2015.

First, let's address the elephant (or the donkey) in the room: With just a week to go until votes are counted, many investors are downright terrified of the outcome of the U.S. presidential race.

Related: It Looks Like Investors Have a Clear Favorite in the Election

While Hillary Clinton is leading in the polls and is the safe "status quo" choice, her policy plans are likely to hammer a wide swath of the economy, including drug and biotech companies and the entire energy sector. Donald Trump, touting aggressively nationalist trade and immigration policies, is also now closing the polling gap as the race tightens in the final stretch.

That could very well be the reason stocks are simply unwilling to move as we exit the quietest October, in terms of trading activity, in 40 years.

But there are also reasons to doubt the apparent economy/earnings recovery story.

Related: 7 Big Risks That Could Derail the Stock Market’s Rally

For earnings, the two big drags on margins over the last two years have begun moving in the wrong direction again in recent weeks: U.S. dollar strength (which reduces the value of foreign earnings) and crude oil (which has fallen back below the $50-a-barrel threshold).

The greenback has moved to levels not seen since April as the futures market firms up the odds of a Federal Reserve interest rate hike before the end of the year. And crude oil (and energy stocks, for that matter) are being hammered as the result of OPEC bickering and the failure to agree on the production freeze that has been so frequently teased since February. 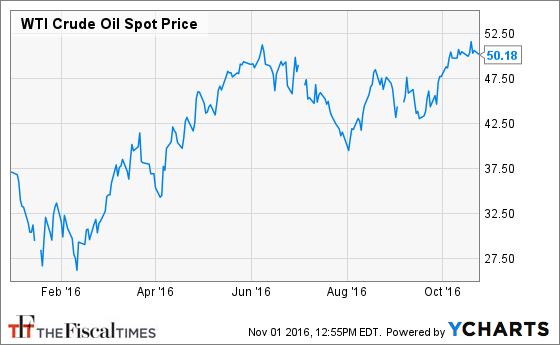 Energy is a big deal since it's still the largest sector-level source of earnings weakness in the S&P 500, with year-over-year earnings expected to drop 65 percent. If the sector was excluded, S&P 500 earnings would be on track for growth of 4.9 percent instead of 1.6 percent.

Related: Oil Prices Are Creating a Goldilocks Scenario for the Global Economy

And the dollar, when it last surged from late 2015 into early 2016, created major headaches for S&P 500 companies with foreign exposure. Early in the first-quarter 2016 reporting season, companies with more than 50 percent of their business outside the United States were expected to post an earnings decline of nearly 20 percent vs. just 3.5 percent for those with more than 50 percent of their business within the United States.

Should both these trends continue — oil weakness, dollar strength — watch for the earnings recession to resume.

What of the economy?

Third quarter GDP growth of 2.9 percent was more than double the 1.4 percent growth seen in the second quarter and better than the 2.5 percent analysts were expecting. But one-off boosts from inventory accumulation and agricultural exports (soybeans mainly, no joke) means the "truer" number was closer to 1.4 percent.

Related: A Fed Rate Hike Will Hit 92 Million Americans Right in the Pocketbook

Another indication of the economy's underlying weakness comes from looking at the increase in final sales to domestic purchasers, which increased just 1.4 percent from last year — down from 2.4 percent in the second quarter. According to Capital Economics, "a reasonable case could be made that this is actually a disappointing GDP report."

What's worse, in their view, is that the misleading indications of strength in the corporate sector and the broader economy could encourage the Fed to tighten interest rates sooner than is actually warranted. Stocks, in their failure to rally on the apparently positive news, could be sniffing out this looming policy mistake.