As U.S. equities enjoy one of the quietest periods in market history — with the CBOE Volatility Index (VIX) melting away as the Dow Jones Industrial Average hovers just below 21,000 — the optimists are holding onto a few articles of faith.

Among them: That, despite weak "hard" economic data, ebullient "soft" survey-based data will translate into a second-half rebound; that the recent energy-driven rebound in earnings growth will continue, even as crude oil has dropped nearly 10 percent over the past month; and that deficit-bloating fiscal stimulus efforts out of the Trump White House are going to somehow pass a gridlocked Congress.

All of this, in turn, is justifying sky-high stock valuations: The S&P 500's cyclically adjusted P/E ratio is at nosebleed levels only exceeded during the run-up to the 1929 and 2000 market bubbles.

Related: How Oil Prices Could Ruin the Stock Market Party

Trouble is, three big headwinds are set to pressure corporate earnings going forward — something the bulls are, for now, simply ignoring.

You've probably missed it, with all the focus on Apple (AAPL) and the Nasdaq Composite here at home lately, but some serious volatility and weakness is underway in the Middle Kingdom. China's Shanghai Composite is down more than 7 percent from its recent high and has broken out of a smooth, well-managed rebound from its early 2016 lows.

Overall, the Shanghai Composite is down more than 40 percent from its 2015 high. Just file that little factoid away in your subconscious as you look at Dow 21,000 and Nasdaq 6,100. 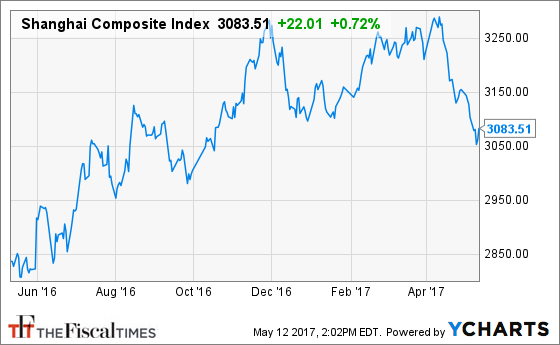 The problem is that China's debt problem is flaring up again as Beijing once more clamps down on bad lending practices, runaway credit growth and recurring asset price bubbles. Industrial commodity prices are collapsing, both in anticipation of a slowdown in China's GDP growth and because metals are often used as collateral in shadow banking loans.

Capital Economics is looking for China's GDP growth rate to slow from 6 percent now to 4.5 percent in 2020. For the last 10 years, employers have enjoyed a position of power over their laborers. The Great Recession and its aftermath — as well as the delayed retirement of many Baby Boomers and relatively lax immigration policies from President Obama — resulted in an excess supply of labor, intense competition for good jobs … and stagnant wages. This boosted corporate profits since labor costs are the single largest expense line item for most businesses.

But now, with the unemployment rate at just 4.4 percent (lowest since 2001), Baby Boomers exiting the workforce in hordes and President Trump clamping down on both skilled and unskilled immigration, the tables are turning. According to the NFIB survey of small businesses, a net 33 percent say they have unfilled job openings — a level not seen since November 2000. As competition for good workers intensifies, the rate of firms planning to raise pay has returned to cycle peaks seen in 2000 and 2007.

At the same time, cautious consumers have kept retail sales modest and prevented many companies from passing these higher labor costs onto buyers. Less than 20 percent of NFIB respondents are planning to raise prices, well below the 40-plus percent seen in 2008.

The stock market seems remarkably unperturbed about the prospect of another Fed rate hike in June followed by one more in September, and by the start of a balance sheet drawdown in December — all of which is the "consensus" policy view at this point. 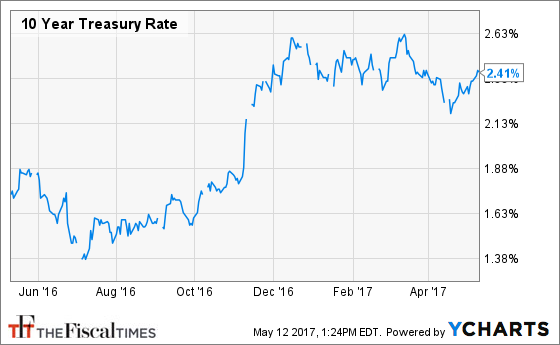 Remember that all recessions are ignited by higher interest rates, and that only three times in the modern area have Fed rate hikes not torpedoed the economy (resulting in short-cycle "soft landings" instead) — but even then, the higher rates did result in nasty market volatility and financial stress.

Related: How the Government Is Making It Harder for You to Retire

Currently, the futures market expects short-term interest rates to double over the next seven months to 1.5 percent. This aggressive pace of policy tightening, while not bothering stock bulls, has rattled the bond market, keeping the 10-year Treasury yield in a downward drift over the last six months. If these folks shared the equity market's ebullience and growth outlook, the 10-year yield would be pushing well past 3 percent.